- January 04, 2021
This blog post has been a long time coming, but it feels right to write it now, at the start of a new chapter, and a new year. I began this blog with the intention of telling stories and I hope that I've accomplished that. I also began it as a way to give myself tangible memories, and rereading old posts feels like a wave from an old friend.  I got my final IB results two days ago and I think that marked the true end of my UWC experience. Thinking about those results has been something that's been weighing on me all through this long, awful year. Until the final paper was written, the final exam was sat, I felt that there was always the chance that I wouldn't finish the IB. No matter how much support I had from friends and family, I always had the knowledge that choosing to stop would've been so easy.  I've had friends this year that have chosen to step back from the IB, either temporarily or permanently, and I'm so proud of them for prioritising their own heal
2 comments
Read more 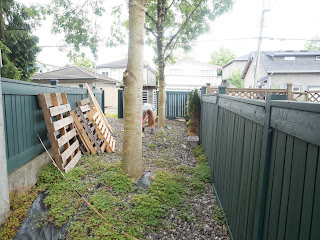 Space is at a premium in Vancouver. The small balcony in my apartment is stacked with plants, hanging pots dangle from the roof, and my windowsills are lined with hardy succulents. There is not much space to garden. When I was small, my building stata built a few raised beds on the narrow strip of land beside the building. I spent hours digging in the dirt – I grew rhubarb and peas and herbs. It’s something that I’ve missed. The building where I live now has a similar piece of land beside it. It was empty and fenced off, and people would throw rubbish over the fence into it. There was nothing in it, and the ground was covered in pebbles and cigarette butts. But it had light, and the two trees in the space provided some shade, and it was quiet because it backed onto the alley. I spoke to the strata council, and I applied for a Neighbourhood Small Grant. The original space    The grant committee looks for submissions from members of the neighbourhood who want to run projects th
2 comments
Read more

- May 04, 2020
Hello! It’s been a while! It feels like it’s been much longer than it has, which I’m sure many of you can relate to. After my rather hectic journey from eSwatini to South Africa to Hong Kong to home, the days have stretched out and merged. When I arrived home, I isolated myself from my parents as best we could manage in our small flat. My father is immunocompromised, and my mother seems to catch absolutely everything and have it turn into pneumonia, so we were all rightfully wary of me, and my multiple flights home.  I was mostly confined to my room and a chair in the corner, I stayed two metres from my parents at all times, and I wasn’t allowed in the kitchen. I carried around a little spray bottle of bleach and a cloth to wipe down any surfaces I might have breathed on. It was not the most joyous homecoming I have ever experienced. After my two weeks of quarantine, I was allowed back in the kitchen where I promptly hopped on the bandwagon of sourdough making.   Bliss. I, li
1 comment
Read more

Stay home and shut up: thoughts from self-isolation

- March 24, 2020
Leaving South Africa felt like giving up. It felt like a personal weakness, a concession. It was a misty morning and the airport was so empty I felt as if I had managed to wander in by mistake past the 'closed' signs. This week has been interesting. There's been so much support from friends all around the world - friendly messages, offers of homes to stay in and introductions to be made. I appreciate all of it so much - if I've been poor at responding to messages, I'm sorry. It's just been a bit overwhelming. It looks like all of my friends have made it home safely, for which I'm deeply grateful. I'm also incredibly grateful to the airport and airline staff who have continued to work, and are making it possible for me and heaps of other people to get home. In the gate for my first flight, the crisis was more visible to me that it had been before. There were families swathed in plastic ponchos and wearing laboratory goggles. One couple had donned white
2 comments
Read more

- March 18, 2020
At the end of my last year at Waterford, I collaborated with two friends on a devised theatre piece. It told the story of three friends from three different contexts, who experienced an unspecified, dramatic event that forced them to leave one another. It followed them through their separated lives through a series of monologues. While we were creating the piece we discussed what the catalyst should be, before deciding to leave it to the audience. We represented it by the audio of an explosion, and simply referred to it as 'The Move.' 'The Move,' we decided, could represent climate crisis, financial crash, war, natural disaster, and more. I don't think we ever talked about a pandemic. Each of our characters had different reactions to the move, each of them could only do so much, each was limited by her context. During the workshopping process, we had long talks about how we would feel if we ever had to leave Waterford, if we were forced out. I thought a lot about th
5 comments
Read more

Back on a Beach: Maia in Moz 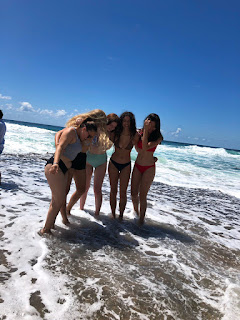 Mozambique felt like the beaches and small towns of my childhood - market stalls under rusted corrugated metal roofs, pyramids of tomatoes, no shoes in site but flip flops, clear water and sizzled skin and greenery. We arrived in the afternoon, piling out of our kombi. It took a bit of walking before arriving at our Airbnb - a barebones house up a hill that could fit the ten of us quite comfortably. We made a food run, and spent the first night crashed in the living room lit by lamps and candles (there was a town wide power outage.) We ate freshly baked bread and drank cheap Mozambican rum and beer and played drinking games in the dark. (Credit to Endi and Julia - they came up with a Waterford-specific boardgame called 'Highway to Hell.' Emhlabeni people take a shot.) The next morning sent us in search of the beach. It was wonderful. I haven't swum in the Indian ocean since I was fourteen, and it felt like it welcomed me back. The water was warm, the wav
Post a Comment
Read more

- February 27, 2020
It’s been far too long since I’ve updated, and I’m sorry about that. It’s been a bit of a hectic time – I’ve handed in final copies of my Biology IA, my Director’s Notebook and Process Portfolio for theatre, drafts of my World Lit Assignment and Political Engagement Activity, I’ve done my final TOK presentation, and my Extended Essay is well underway. Along with that, I’ve been getting to know IB1s and settling back into the rhythm of Waterford. Midterm starts tomorrow – along with nine friends, I’m heading to Mozambique for a break by the beach. I’ll go surfing, eat seafood, and recharge. It’ll be a good break and I’m looking forward to it. I wrote about my mental health recently, and I’m feeling a lot better. I’m feeling on top of my school work and in control of my life, and it’s good to be at Waterford where there’s sun and mountains and friends. I’ll write about Moz after the trip, and try to get better at general updates. IB2 is as busy as was promised, but it feels positive
Post a Comment
Read more
More posts